The Elves, Sagas and Volcanoes of Iceland

You will embark MS Fram in the Icelandic capital of Reykjavik, home to some of Iceland’s most breath-taking scenery, including Thingvellir National Park, which is a UNESCO World Heritage Site and Gullfoss, where you can find the Golden Waterfall.

Day two will see you arrive in Stykkishólmur, located on Iceland’s western coast. Lava and incredible rock formations, hot springs and glaciers are all highlights here and popular activities include kayaking and hiking.

As you sail into the Midnight Sun, you’ll be heading for the small island of Flatey, where time seems to have stood still, before continuing on your expedition cruise to Latrabjarg Promontory, which is home to millions of birds, including puffins and razorbills.

On day four you will awake in the majestic port of Ísafjörður, the largest town in the westfjords with a population of around 3,000.

If sea birds are your interest, then your next port, Reykjarfjörður, is the place for you. The Hornbjarg cliff is one of the greatest seabird habitats in Iceland and as Reykjarfjörður can only be reached by boat or on foot, MS Spitsbergen will try to land her polarcirkel boats so you can take a closer look at this wonderful area.

Siglufjörður is next, where you can enjoy the rugged landscape before sailing on to Grímsey, where the Arctic Circle meets Iceland.

MS Fram then moves on to Akureyri, which is perfectly located for reaching many of Iceland’s renowned natural beauty spots, including the stunning Goðafoss waterfall.

Húsavík, the oldest settlement in Iceland, is your next port of call before reaching Bakkargerdi, known as “the land of the elves” and then sailing for Seyðisfjörður which has a strong Norwegian influence.

The picturesque fishing village of Höfn comes into view on Day ten, where large mountains, wide rivers and the Vatnajökull glacier dominate the area.

Surtey begins day eleven and is a volcanic island that was formed by an eruption that started deep beneath the ocean and finally reached the surface in 1963. Heimaey and its
magnificent cliffs and birds will be your last stop before MS Spitsbergen heads back to Reykjavik where you will disembark. 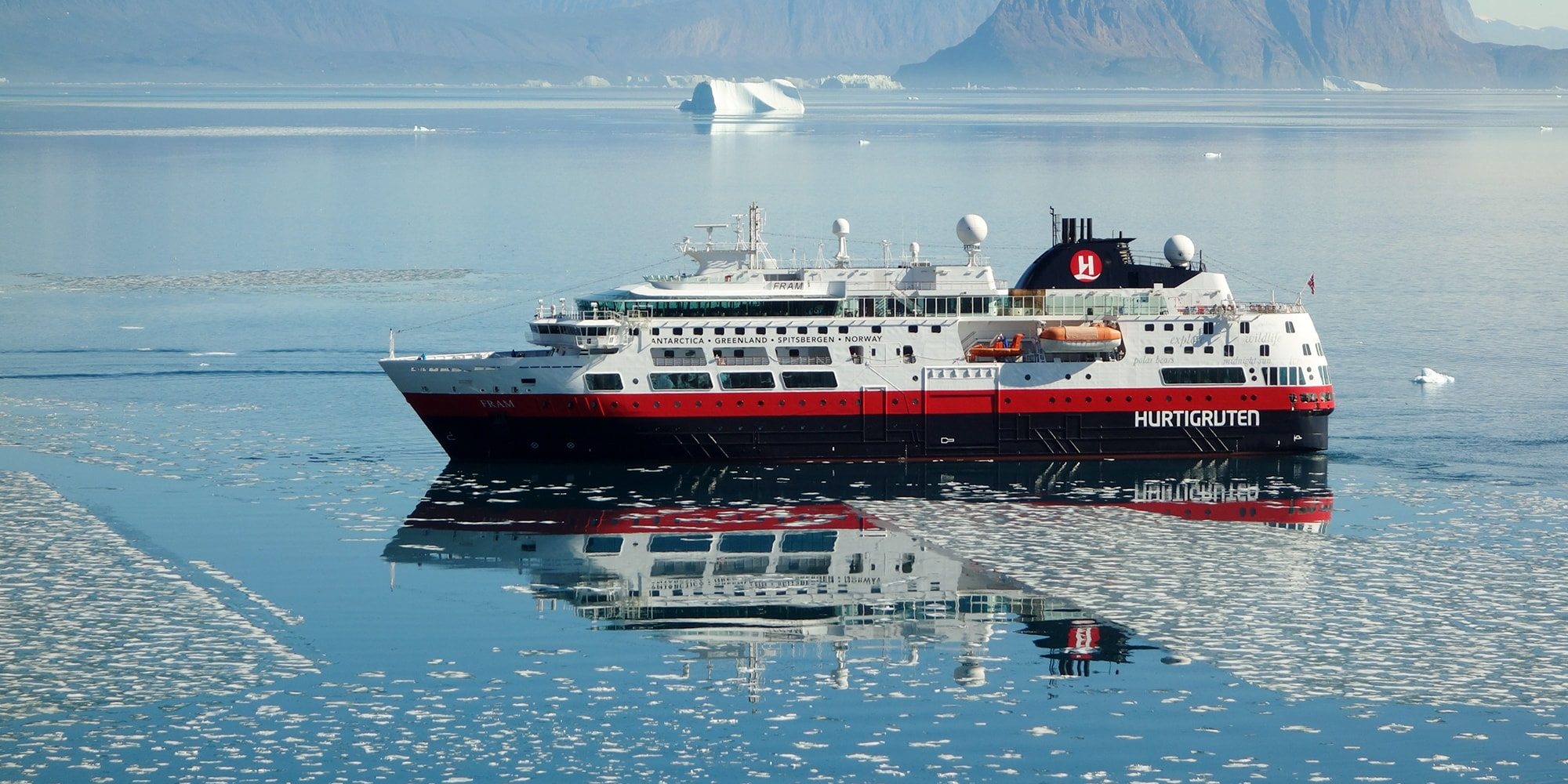 In service since 2007, MS Fram is a purpose-built expedition ship with capacity for 318 guests. Equipped with everything you need to get the most out your time in the Arctic or Antarctica, MS Fram is great choice for those seeking immersive experiences in the Polar Regions.

Close quarters exploration is at the heart of any voyage aboard MS Fram. As such, she is equipped with a fleet of Zodiacs which are deployed almost daily, weather permitting. She also carries a number of kayaks as well as an assortment of necessary hiking equipment. Each time you step off MS Fram you will be joined by the ship’s expert Expedition Team. Selected due to their passion for exploration and their unsurpassed knowledge in the fields of geography, history and wildlife, they will be on-hand to ensure you get the most out of every excursion.

In terms of onboard comforts, MS Fram has four categories of accommodation; Arctic Insides, Arctic Outsides, Arctic Superiors and Expedition Suites. The ‘Arctic’ categories are smaller and consist of separate beds, a sofa (which can be transformed as a spare bed should it be required) and private bathroom facilities. The Arctic Superiors are more spacious and have a large picture window while the Expedition Suites boast separate seating areas and come with a generous ‘cabin kit’ which includes a bathrobe, slippers and other amenities.

Where dining is concerned, there is one main restaurant onboard MS Fram. Called ‘Imaq’ and blessed with some truly glorious views courtesy of the large, well-positioned windows, it boasts a wonderful atmosphere during meal times. Breakfast and lunch are both self-service buffet affairs with choices ranging from cold meats and cheeses to fresh breads, pastries, pastas and assorted salads and fruits. Dinner is generally served at your table, though it is not uncommon for at least one evening meal to be also be buffet style during longer expeditions.

The ship also has a self-service snack bar available throughout the day. Located near to the main reception, here you can pick up light bits such as biscuits, cookies and crisps or help yourself to tea or coffee.

Other facilities on MS Fram include an observation lounge/bar area, a gym and even an outdoor jacuzzi.